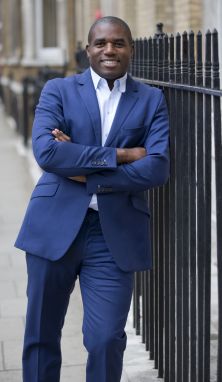 David Lammy is the Member of Parliament for Tottenham, one of London’s most diverse constituencies. One of the leading agenda setters in the fields of social activism, diversity and multi-culturalism, he was a member of the previous Labour Government (2001-2010), is respected across the party spectrum and a well-known figure amongst the general public.

A well-known advocate of social activism, diversity and multi-culturalism, David’s current position as an active backbench MP has enabled him to engage in his passion for tackling the big issues facing society (on a macro and micro scale) and provide tangible solutions to bring about effective change.

A passionate campaigner for Britain remaining in the European Union prior to the referendum in 2016, David has continued to be an outspoken critic of the government’s Brexit negotiation strategy and firm supporter of a second referendum. He also led the campaign for the Windrush British Citizens to be granted full British Citizenship, has been at the forefront of the fight for justice for the families affected by the Grenfell Fire, and published the widely recognised review into the treatment of, and outcomes for, Black, Asian and Minority Ethnic individuals in the Criminal Justice System.

David was elected to Parliament at the age of 27 in 2000, following the untimely death of Tottenham’s long-standing MP Bernie Grant. He joined the Labour Government in 2002 and remained a member until 2010. He was Parliamentary Under-Secretary for Health, Minister for Constitutional Affairs, Minister for Culture, Media and Sport and latterly Minister for Higher Education. He was admitted to the Privy Council in 2008.

David writes for national newspapers, including the Guardian, the Times, the Independent and the New Statesman, is President of the British and Foreign Schools Association and is a former trustee of Action A