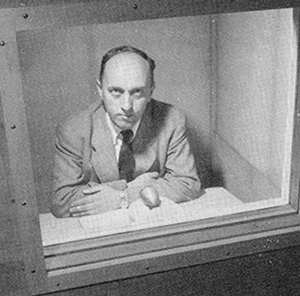 Abstract: Werner Meyer-Eppler (1913-60) is a figure of central importance in the history of electronic music and the post-1945 avant-garde, by virtue of his publication of Elektronische Klangerzeugung (1949), 1949-53 lecture tours on phonetics, information theory and speech synthesis, founding role in the Cologne Electronic Music Studio together with Herbert Eimert and Robert Beyer, major influence upon Karlheinz Stockhausen (who was for a period his student), Bruno Maderna, Henri Pousseur and others, and later work in Hermann Scherchen’s studio in Gravesano.

Drawing upon previously unknown archival material in London, Bonn, Düsseldorf and Berlin, I trace Meyer-Eppler’s little-known earlier life, involvement with the Nationalsozialistiche Fliegerkorps from the mid-1930s, work on an elite radar project near the end of the war, subsequent dismissal from his position as part of denazification (after brief employment at the British Aircraft Production Ministry), and struggle to have his classification changed in order regain academic work, opposed by his former colleague, physicist Walter Weizel. This led to a sideways disciplinary shift and second Habilitation on Meyer-Eppler’s part, in order to work as an assistant at Paul Menzerath’s Institut für Phonetik in Bonn. I also challenge Meyer-Eppler’s own account of his meeting with Homer Dudley, from Bell Telephone Laboratories, in the late 1940s, where he allegedly saw the vocoder demonstrated. This narrative has been repeated in most histories of electronic music.

I argue that these circumstances, which led to Meyer-Eppler pursuing the work for which he became notorious, necessitate a historical model for the growth of music technology in post-war West Germany, away from ideals of scientific ‘progress’ towards the crucial importance of political events.

Bio: Ian Pace has a major international reputation as both a pianist and a musicologist. He has recorded 40 CDs, played in over 25 countries, and given over 300 world premieres. He has worked with many leading living composers and is closely associated with the work of Michael Finnissy, whose complete piano works he performed in 1996 and 2016-17, and whose work The History of Photography in Sound he premiered, recorded, and about which he published a monograph in 2013. He has also edited two further books on Finnissy. Forthcoming publications and recordings in 2019-20 include the complete piano works of Brian Ferneyhough, John Cage’s Music of Changes, and new books on Writing about Contemporary Musicians (Routledge), Researching and Writing about Contemporary Art and Artists and Rethinking Contemporary Musicology. He will also give keynotes in conferences in Aveiro, Portugal and São Paolo, Brasil. He is Senior Lecturer and Head of Performance at City, University of London, and a trustee and Awards Officer of the Society for Music Analysis.