The piano has shaped many aspects of musical life throughout the centuries. Around 1900, its impact was particularly revolutionary, I contend, when the instrument was reimagined through a mechanical lens. Fitted with a pneumatic mechanism that read perforated music rolls, this new form of piano enabled previously unimaginable forms of music-making. An early model, patented in 1903, was the Metrostyle Pianola, which promoted domestic music-making through simplified processes in households around the world. In the following decades, the “reproducing piano” shifted the focus to automated playback and thereby to new forms of listening. Both models also provided novel means for spreading the understanding and “love” of “fine music” among ever wider parts of the population. My presentation considers two initiatives for music appreciation and pedagogy that employed these new types of instruments between 1900–1930.

At the centre of my attention are the different ways in which both projects utilized the surface of the music rolls to impart interpretative and analytical commentary. These forms of annotation integrated the perforations of the paper rolls into their own notational system. I discuss the graphical and mechanical logic of these (an)notations and the extent of their legibility. A critical factor concerns the automated synchronization between auditive and visual stimuli that the material constitution of the rolls affords. While this audio-visual synchronisation was essential to the success of one pedagogical approach, it imposed a limitation on the learning process in the other.

Such cognitive implications aside, the audio-visual interface of these annotated music rolls has inaugurated standards that still inform technologies for music pedagogy and appreciation developed today. Comparison of these initiatives showcases a changing media economy in the early twentieth century and illuminates different dimensions of a playful engagement with music and its mechanical qualities. 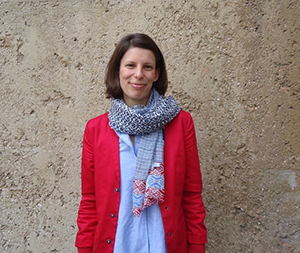 Bio: Stephanie Probst is a Postdoc at the University of Potsdam. Previously, she was research associate in the project “Sound and Materialism in the 19th Century” at the University of Cambridge and held a fellowship at the Deutsches Museum in Munich, where she started her new research project on annotated music rolls for player pianos. This is one case study in a monograph on the mediation of manual and mechanical forms of inscription in modalities for visualising music around 1900. Her PhD dissertation (Harvard University, May 2018) investigates intersections between music theory, psychology, and the visual arts in theories of melody and the line as conceptual metaphor in the 1920s.