This event is now fully booked. We have overbooked to allow for dropouts so will not be holding a waiting list. Coverage of the event will be posted on the website and social media sites following the talk.

The 2019 George Daniels lecture will be given by Dr Roger W. Smith OBE 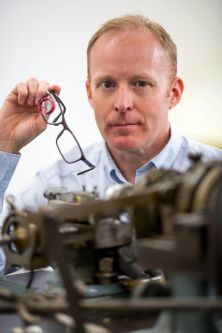 Roger W. Smith’s horological career began, aged 16, at the Manchester School of Horology. He passed out top of his class and was awarded the British Horological Institute’s Bronze Medal. During the course, Dr. George Daniels (1926 - 2011), was a visiting speaker and inspired Roger’s ambition - to hand-make watches.

After eventually working alongside Dr. Daniels to create the Millennium Series of watches, Roger established his own studio in the Isle of Man in 2001. His first creation was the Series 1 followed, in 2006, by his seminal Series 2 watch.In 2012, the British Horological Institute awarded Roger the Barrett Silver Medal in recognition of his ‘Dedication to continuing the finest traditions of English watchmaking’.

In 2013, Roger was invited by the UK Prime Minister’s office to become an Ambassador for the GREAT Britain campaign, representing the best of British innovation, technology and creativity.

To celebrate these values, Roger designed and made the now iconic ‘Great Britain’ watch.

In 2015, Roger Smith announced the first range of authentic British watches for decades. The range comprises reimagined Series 1 and 2 watches, newly developed Series 3 and 4 watches and the Series 5 or Open Dial watch. All feature Roger’s latest evolution of his single-wheel co-axial escapement.

In 2018, Roger was awarded the Order of the British Empire (OBE) for ‘outstanding services to watchmaking’.

In 2019, Birmingham City University awarded Roger an honorary Doctorate in recognition of his advancements in horology.