This event is now fully booked; returns may be available on the door shortly before the performance.

Inventory of My Life is a performance collaboration between Kae Ishimoto (Japan), Soosan Lolavar (U.K.–Iran), and Rosa van Hensbergen (U.K.). It explores questions of inheritance, object attachment, and loss, as they inflect both our personal lives and our lives as makers within specific traditions and cultures. When a person passes away, all the stuff they leave behind is there to be sorted by the rest of us. Instantaneously, items that seemed light, disposable even, grow heavy with the weight of personal loss. The experience of working within a tradition, of having knowledge—somatic, intellectual, technical—passed down to you over many years, can be similarly weighty. And it can be hard to know how to get out from under that weight. Exploring what it means to inherit and disinherit, to store and to generate new stores, takes us as women towards specific lineages, and arrives us at shared metaphors: fabric, threads, clothes and cloth. 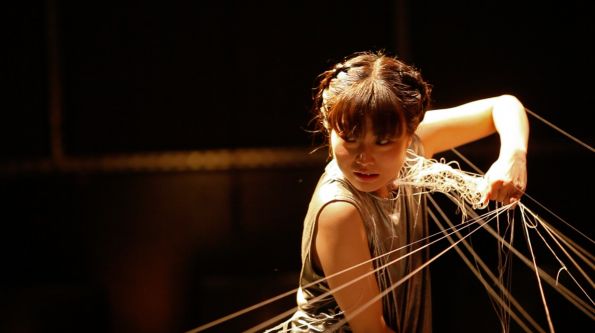 This collaboration began with Rosa setting Kae and Soosan a task—inspired by a moment in the works of Samuel Beckett—of listing up the items they could never throw away. Of creating, that is, an “inventory.” Some of the items that came out were Kae’s store of Ishimoto Kimono, inherited from her female line of Japanese dancers, Kae’s grandmother’s sewing scissors, and Soosan’s composer notebooks. Working with inherited movement, the traditional Iranian instrument of the Santoor, and the stories that surrounded Kae and Soosan’s “inventories,” led to the creation of a 50-minute collaborative performance work.

Watch the trailer for the event here.

Rosa van Hensbergen is a poet, performer, and researcher. She has five poetry pamphlets published, as well as a couple of academic articles, and a book translation on Japanese butoh dance. She publishes other people’s work through her small press, Tipped Press, and co-edited magazine, The Paper Nautilus. She was the 2012 recipient of the Harper-Wood Studentship for creative writing and travel, and a recipient of a KulturKontakt and Austrian Federal Chancellery writer-in-residency in 2015. Her performance works, usually involving collaborations with dancers and musicians, have been performed in the U.K., Germany, and Japan, and she has held performance residencies in each of these countries.

Kae Ishimoto was born into a family of traditional Japanese dancers, began to study jazz dance at age four, and is trained in modern and contemporary dance. Since 2002, she has been working with the butoh dancer Yukio Waguri. Since Waguri passed away in 2017, she is the only dancer of her generation continuing to teach in the Hijikata-Waguri butoh lineage. In 2011, she performed “Transformation Girl,” choreographed using the Hijikata method of butoh, in 7 countries in Asia and Europe. In 2004, she co-created a performance company with 8 musicians called Wangnin Bunmei (“Fool’s Civilization”). She and her company have been invited to 13 countries in Asia, Europe and the US. She has performed with Co. Un Yamada Company, Natsu Nakajima + Mutekisha, Yoshito Ohno, Sundrum, and has collaborated with artists from Korea, the U.K., the U.S., India, Indonesia, China, Malaysia, Brazil, Hong Kong, and elsewhere. She regularly leads workshops and performs at butoh and dance festivals internationally.

Soosan Lolavar is a British-Iranian composer and ethnomusicologist whose music has been performed across the UK, as well as in the USA, Canada, Iran, UAE, Japan, Chile and Australia. Her work has been broadcast on BBC television in both the UK and Iran as well as played several times on BBC Radio 3. Having studied Iranian classical music, with the help of a Fulbright Scholarship 2015-16, her music draws on ideas from both Western and Iranian traditions. Her academic work considers contemporary composition practices in Iran, discourses of authenticity and dichotomies of East/West in post-colonial contexts. She holds degrees in Social and Political Sciences (University of Cambridge), Musicology (University of Oxford), Composition (Trinity Laban Conservatoire), and an Advanced Music Certificate (Carnegie Mellon University). She is currently pursuing an PhD in music focusing on contemporary composition in Iran (City, University of London).

This event is generously supported by the Sasakawa Foundation and the PRS Foundation's 'Women Make Music'.