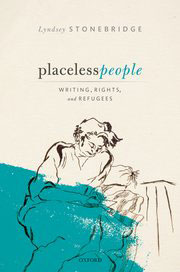 In 1944, the political philosopher and refugee, Hannah Arendt wrote: 'Everywhere the word 'exile' which once had an undertone of almost sacred awe, now provokes the idea of something simultaneously suspicious and unfortunate.' Exiles from other places have often caused trouble for ideas about sovereignty, law and nationhood. But the meanings of exile changed dramatically in the twentieth century, to an extent we are yet to reckon with.

In her new book, Lyndsey Stonebridge argues that mass statelessness provoked writers and intellectuals into new thinking about sovereignty, humanism and the future of human rights. Writing before the capricious humanitarianization of mass displacement set in, thinkers such as Arendt, Simone Weil, George Orwell, Samuel Beckett and Dorothy Thompson all understood that refugee ‘crises’ were in reality crises provoked by nationalism and failing forms of political citizenship.

Lyndsey Stonebridge is a Professor of Humanities and Human Rights in the Department of English Literature/IRiS, University of Birmingham

Refreshments will be available following the discussion.  Further details: CIPS@city.ac.uk