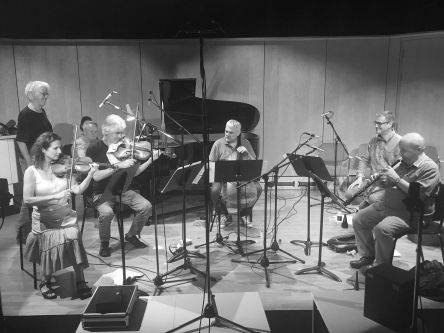 Madeleine Mitchell, violinist and Director of the London Chamber Ensemble, introduces her premiere recordings for Naxos of chamber music by Wales’ foremost female composer to coincide with St David’s Day.

Mitchell will introduce the life and work of Grace Williams (1906-77), a pupil of Egon Wellesz and Ralph Vaughan Williams, focusing on the chamber music, including the substantial Sextet for oboe, trumpet, violin, viola, cello and piano of 1931 and the Suite for Nine Instruments of 1934, with recorded examples. A close friend of Britten, Grace Williams was the first British woman to score a feature film - The Blue Scar (1949). Her best known pieces are the lyrical and evocative symphonic works on distinctively Welsh subjects, the Fantasia on Welsh Nursery Tunes (1940), Penillion (1955), and the large scale Missa Cambrensis (1971).

The event will be accompanied by live performances of Williams' chamber music by players including Konstantin Lapshin and David Owen Norris (piano) and Joseph Spooner (cello).

Distinguished violinist Madeleine Mitchell, described by The Times as “one of the UK’s liveliest musical forces", has performed as soloist and chamber musician in 50 countries with major orchestras and in festivals including the BBC Proms. Her discography has been widely acclaimed and includes albums of works written for her by well known British composers, nominated for both Grammy and BBC Music Awards, as well as early 20th century British music. February sees her return to the USA for a major solo tour and she premieres the latest work written for her, by Robert Saxton at the Three Choirs Festival 2019.

Madeleine formed the London Chamber Ensemble in 1994, initially to perform and record Messiaen Quartet for the End of Time, subsequently expanding to include 3-12 outstanding chamber musicians in a wide range of repertoire.

The event is generously supported by Naxos and the British Music Society.