Composer Manuella Blackburn presents a programme of her acousmatic works, exploring the home as a resource for sounds. Noises including ice cube trays, ticking clocks, kitchen utensils and rotary telephones are transformed from the mundane and the everyday into intricate sound sculptures.

Blackburn will diffuse these works live, over City’s eight-channel system. She will also present a seminar, The Terminology of Borrowing, the following day at City (Wednesday 13 February): details here.

The experience of being a mother after the birth of my two children, and spending more time in the home environment made me listen to house sounds in more detail. These sounds became hallmarks and signifiers for a chapter in my life where I was grounded in one place, yet still eager to be creative. These works mark a transition, and also provide a personal reflection on the sounds from my immediate surroundings (MB) 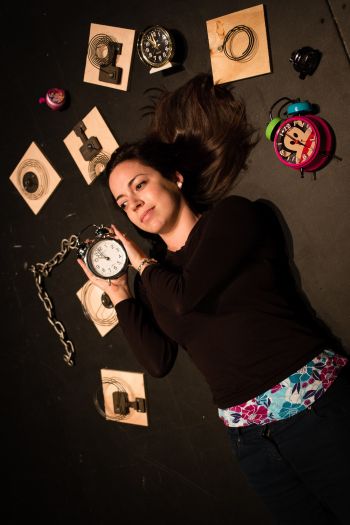 Manuella Blackburn is an electroacoustic music composer who specialises in acousmatic music creation. She has also composed for instruments and electronics, laptop ensemble improvisations, and music for dance.

She has worked in residence in the studios of Miso Music (Lisbon, Portugal), EMS (Stockholm, Sweden), Atlantic Centre for the Arts (New Smyrna Beach, FL, USA), and Kunitachi College of Music (Tokyo, Japan).

She is currently Senior Lecturer in Music at Liverpool Hope University (England, UK).