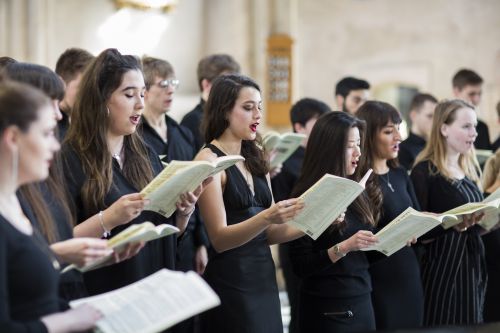 Join us for an evening of festive choral music at the beautiful church of St Clement’s, Finsbury, a five-minute walk from the main university campus (Northampton Square). The programme will include well-loved carols, traditional and early music, alongside contemporary works. The event is free to attend and all are welcome.

The evening will include Christmas chants, performed by City's specialist vocal ensemble Civitas, who are devoted to the performance of the early musics of Eastern and Western Europe, including both plainchant (Latin, Byzantine, and Slavic) and polyphony. Civitas is led by BMus Programme Director Alexander Lingas, also known internationally as the founding Director of the professional vocal ensemble Cappella Romana.

City University Chamber Choir comprises talented vocalists from the Department of Music and from across the university. In the last two seasons, they have performed large-scale works including Haydn’s Missa in tempore belli (Paukenmesse) and Vivaldi’s Gloria. In 2018 and 2019, the choir travelled to Paris to participate in the festival de printemps de l’Université PSL, together with other international vocal groups, performing Brahm’s German Requiem and Schubert’s Mass in E flat. This season, they will be directed by Rory McCleery, countertenor and founder of the critically acclaimed vocal ensemble The Marian Consort.