Admission Price: Free to attend; all welcome. Please reserve a place, since capacity is limited.

Paris Sciences & Lettres Choir will perform a programme of standards, hymns, spirituals and traditional music, reflecting the idea of "freedom songs". The choir will be joined by guests Raphaël Imbert, major French saxophonist and composer, and Karol Beffa, composer and pianist.

Many religious hymns are perceived as freedom songs, but the very essence of music is emancipation. A great number of cultures developed traditions of song to counter oppression, or express the joy of mere survival through wartime.

This concert includes diverse songs symbolic of this idea, ranging from 'We Shall Overcome', sung on civil rights marches led by Martin Luther King, 'Nkosi Sikelel' iAfrika', widely adopted as a counter-Apartheid statement, and music by Johann Sebastian Bach, composed in Leipzig a generation after the horrors of the Thirty Years War. 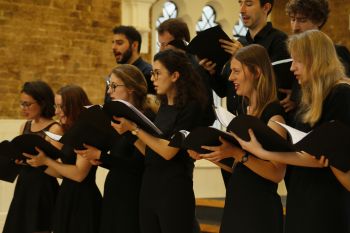 The Symphonic Orchestra and Choir of Paris Sciences & Lettres University (OSC-PSL) comprises around 80 instrumentalists and 80 singers, who are students, researchers or teachers affiliated with PSL University, coached by professional musicians.

Under the directorship of conductor Johan Farjot, OSC-PSL plays around fifteen concerts a year, in France and on international tours (China 2014 and 2019, UK 2015, Israël 2016, Bulgaria 2017), with guest soloists or up-and-coming young professional musicians.

Excellence, cross-disciplinarity and creativity form the backbone of Université PSL. Founded in 2011 and awarded “Investments for the Future” funding from the French government, PSL encompasses a number of prestigious schools and institutions covering the arts, sciences, engineering, humanities and social sciences, united by historical relationships, and cultural and geographic proximity.