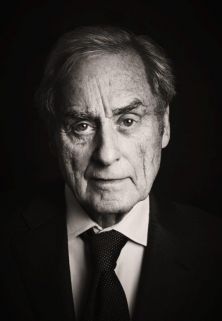 Sir Harold Evans, British-born journalist and writer will discuss his book, Do I Make Myself Clear?, his career in journalism and his hopes and fears for the industry in the future. He will be interviewed by Professor Suzanne Franks, Head of Journalism at City.

Sir Harold turned 90 this summer. With a lifetime as a major figure in journalism, Sir Harold is pretty vocal on the ‘culture war’ that is being unleashed on the free press, fake news, the role of social networks, political polarisation, the denial of the existing facts and of course all things Trump.

His book embraces the idea that “the right words are oxygen to our ideas”  but the digital era, with all of its TTYLs, LMKs and WTFs, had been cutting off that oxygen flow.  “The compulsion to be precise has vanished from our culture, and in writing of all kinds we see a trend towards more - more speed and more information, but far less clarity”, he says. In the tradition of George Orwell, who said that political language is designed to make lies sound truthful, the book reminds us how important it is to write clearly.

Sir Harold Evans is Editor at Large of Reuters. As editor of The Sunday Times of London (1967-1981) and The Times (1981-2), Evans exposed the spy Kim Philby, and campaigned for and won justice and compensation for the thalidomide children. A former President and Publisher of Random House, Evans is the author of The American Century and They Made America. His latest bestseller is Do I Make Myself Clear? Why Writing Well Matters. Voted the greatest all-time British newspaper editor in 2002, Evans was knighted in 2004.