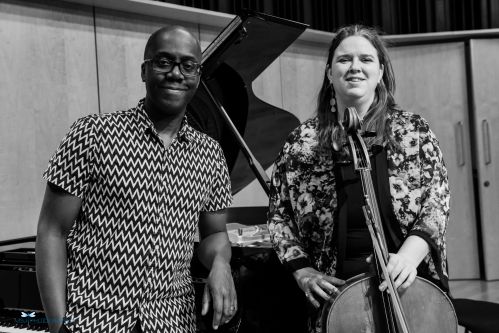 Two artists with highly individual voices and diverse backgrounds join forces to present a programme exploring a range of music through improvisation. Shirley and Robert met when working on Robert’s epic composition Invocation, premiered at the London Jazz Festival in 2014, and this project developed out of their conversations about improvisation, fluidity of genre and the central importance of both live interaction and spontaneity in performance.

Shirley Smart is a cellist with a unique fusion of influences. She draws on 10 years experience of living in Jerusalem, studying and performing music from the Mediterranean and Middle East, jazz and free improvisation. Since returning to the UK, she has established herself as one of the most creative and innovative cellistsin the UK, working with many leading jazz and world music groups, including Antonio Forcione, Mulato Astatke, Gilad Atzmon, Neil Cowley, Julian Ferraretto, Robert Mitchell, Kosmos Ensemble, Shekoyokh, and Alice Zawadski, as well as leading her own projects. She teaches improvisation at the Royal College of Music Junior Department and at City, University of London, as well as the National Youth Jazz Collective and Jazzlines.

Her first album Long Story Short will be released on 33records on autumn 2018.

Robert Mitchell began serious piano studies at the age of 6 in the UK, while simultaneously developing a love of Soul, R&B, the popular music of the 70s and 80s and the work of legendary pianists Art Tatum and Oscar Peterson "at just the right time for my ears and heart". Mitchell studied on the Bsc course at City, University of London and at the Guildhall School of Music and Drama, emerging as an important member of the London scene with the band Quite Sane and the Tomorrow’s Warriors scheme. This led to further involvement with musicians from both sides of the Atlantic, including Steve Coleman, Greg Osby, Courtney Pine and Steve Williamson.

Robert releases a new digital EP Epiphany (his 10th release) in the Autumn of 2018 and is currently touring UK/France with his trio Epiphany3 (Tom Mason and Saleem Raman). He is also releasing a second book of poetry book, City Of Sanctuary.

Smart's playing is particularly remarkable throughout. She readily demonstrates a wide range of techniques incorporating an understanding of improvisation drawn from a jazz background and her extensive knowledge of Arabic maqam (Songlines)