The Department of Music in the The School of Arts and Social Sciences welcomes Anyssa Neumann as part of its 2018-19 Research Seminar Series. The seminars are open to all - no registration necessary. 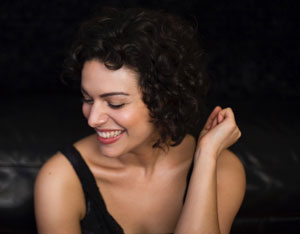 Swedish director Ingmar Bergman’s love of classical music deeply informed his life and work. Appearing through-out his many films are the sounds and stories of the Western canon, from austere medieval chant to Mozart’s operas, from Bach’s solo cello suites to Bruckner’s colossal symphonies.

Dr. Neumann's lecture explores the appearance, function, and meaning of classical music in Bergman’s work, from his earliest films in the 1940s to his last in 2003. Using audio-visual examples drawn from across his oeuvre, she will discuss how Bergman weaves the classical canon into his soundscapes and narratives, incorporates music into the lives of his characters, and finds artistic inspiration in the works and lives of the Western composers.

Praised for the "clarity, charm, and equipoise" of her performances, Anyssa Neumann appears frequently as a solo and collaborative pianist in North America and Europe.

Her solo debut album of works by Bach, Beethoven, Messiaen, and Prokofiev was featured on David Dubal’s radio program The Piano Matters, and she has appeared as recital partner with Grammy Award-winning cellist Sara Sant’Ambrogio (Eroica Trio) and on NPR’s Performance Today. A graduate of the Manhattan School of Music and Oxford University,

Dr. Neumann completed a PhD in musicology at King’s College London with a thesis entitled Sound, Act, Presence: Pre-Existing Music in the Films of Ingmar Bergman under the supervision of Roger Parker. She has twice been a visiting scholar at the Ingmar Bergman Archives in Stockholm and has given papers at conferences in London and New Orleans. As part of Ingmar Bergman's centenary celebrations this year, she has presented lecture-recitals at retrospectives and festivals in Lund, Helsingborg, London, Madrid, Toronto, Banff, Los Angeles, and San Francisco.