Admission Price: Free to attend, please RSVP via the Sign Up form.

The City Law School is pleased to host the latest Athena SWAN Lecture as part of the Dean's Lecture series with guest speaker Professor Ruth Rubio Marín, one of the world's contemporary leading thinkers on gender equality. The talk is entitled 'Women in Europe: Is Time Up?'

Talk Abstract
Relying on Iris Young´s categories of oppression (violence, exploitation, marginalisation, disempowerment and cultural imperialism) the lecture describes the status quo of women in Europe and argues that women are still an oppressed group and that those that are affected by several forms of discrimination are particularly oppressed. It provides a quick and critical overview of the actions and policies that European institutions have taken over time to remedy gender injustice and raises the question as to whether time is up for Europe to fully and fundamentally embrace the overcoming of patriarchy as a defining feature of its political ethos. 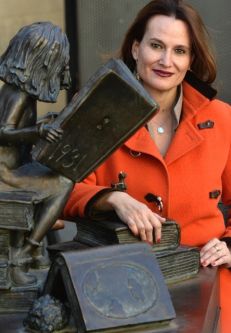 She has extensive experience in dealing with reparations in post-conflict societies including in Morocco, Nepal and Colombia. She speaks 5 languages fluently and has given talks in over 40 countries.  She is an occasional contributor to public opinion formation through editorials in national and international press. Most recently, she has been invited to deliver the 2019 Gruber Distinguished Lecture on Women´s Human Rights at Yale Law School. Her image will be include in the Legacy Wall to be installed in the new building of the ICC to honor her lifelong commitment to gender justice.