Title: "Organising against Democracy: The Local Organisational Development of the Far Right in Greece and Europe" 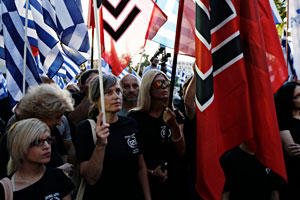 In the past few decades, far right parties have developed from marginal political actors into potent political forces in Europe, changing the contours of the political debate and challenging the moral foundations of liberal democracy.  Despite the geographical spread of, and scholarly attention to this phenomenon, remarkably little is known about the internal mechanics of these parties and the micro-dynamics shaping their organizational development.  Using a vast array of evidence to examine the organizational life of one of the most extreme far right parties in Europe, the Greek Golden Dawn, I analyze the developmental trajectory of dozens of its local organizations and develop an analytical framework to show how these local party units are able to grow roots in some settings but completely fail in others.

To account for this remarkable variation in local organizational life, I systematically show how endogenous and environmental factors affect the capacity of the Golden Dawn to infiltrate local societies. I then explore the applicability of this framework across Europe by examining the development of the far right in two different political settings, in Germany and Slovakia.

Dr Antonis Ellinas is an Associate Professor of Political Science at the University of Cyprus.  He received his PhD from Princeton University and his BA from Hamilton College.  He works on comparative European politics. He is the author of The Media and the Far Right in Western Europe (Cambridge University Press 2010) and The European Commission and Bureaucratic Autonomy (Cambridge University Press 2012, with Ezra Suleiman). His work has appeared in Comparative Politics, West European Politics, the Journal of European Public Policy and the Journal of Common Market Studies, Party Politics, South European Society and Politics and Acta Politica, among others.

The event will be followed by refreshments.