Admission Price: Free to attend. It would be helpful if you can sign up so we can get an idea of numbers attending in advance.

In conjunction with the Institute of Musical Research.

All welcome and admission is free but advance registration is requested for planning purposes.

'“Sell everything except yourself”: Understanding the Backlash against Moroccan Rappers’ Involvement in Organised Political Campaigns'

'The Horn on the Move: Music among Ethiopian and Eritrean Migrants in the Middle East'

'Whose Liberation? Iranian Popular Music and the Fetishisation of Resistance'

'Ta'abiriya / “expressionism" in Arab Music: Composition in the Iraqi School of Oud' 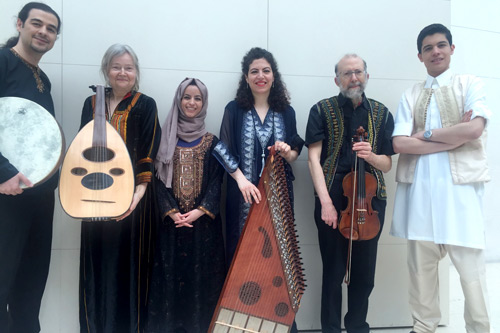 The SOAS Middle Eastern Ensemble is a group of SOAS students and alumni specialising in classical and folk Arabic music performance. The group has performed in several SOAS festivals and events as well as a recent performance at the British Museum. The ensemble is directed by Syrian Kanun player Maya Youssef.

The Middle East and Central Asia Music forum has been running since 2007 and is open to researchers, students and anyone interested in the music and culture of the region. In the spirit of fostering dialogue and interdisciplinarity, we hope that the issues discussed at the forum will be of interest to a broad audience, including musicologists, ethnomusicologists and other researchers in the arts, humanities and social sciences. In addition, we welcome those working on other aspects of Middle Eastern and Central Asian culture broadly speaking (dance, visual arts, media, film, literature, etc.)