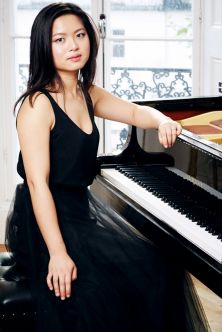 Chinese-Canadian pianist Annie Yim performs throughout the UK, Europe and Canada in major international venues.  Her playing has been praised as 'radiantly coloured', 'thoughtfully articulated' (The Times) and 'outstanding' (Stratford Herald).  She has broadcast live on BBC Radio 3, CBC Radio 2 in Canada, and Portuguese Radio Antena 2.  Annie performed at the 2011 Trasimeno Music Festival Young Artists Concert in Italy, by invitation of pianist Angela Hewitt.

Annie is winner of many competitions including the CBC Debut Young Concert Artists Series (Canada), Friends of Chamber Music Competition (Canada), and Concordia Foundation's Serena Nevill Award (UK).  She is recipient of the Cordwainers' Musical Scholar award in 2014, given by the Worshipful Company of Cordwainers in recognition of her outstanding achievement and contribution to City University London.  She is founder of the Minerva Piano Trio, who made their Purcell Room debut at the Southbank Centre in January 2014 as Park Lane Group Young Artists.  Annie made her London concerto debut playing Beethoven's 'Emperor' concerto at LSO St. Luke's under the baton of Anthony Weeden.
Currently a doctoral candidate in performance and musicology, Annie studies with Joan Havill at the Guildhall School of Music and Christopher Wiley at the City University London.  Her deep interest in musical research has led her to write a thesis on Schumann's musical-aesthetical influence on the original version of Brahms's Piano Trio in B major Op. 8.

A truly multifaceted musician, Annie has been invited by the Canadian High Commissioner in London to play at an official reception, honouring the Queen and the Duke of Edinburgh.  She has collaborated with the renowned fashion designer Erdem for the London Fashion Week in 2013.  As an ambassador of the Concordia Foundation, she has led educational workshops for schoolchildren.

Annie has received coaching in masterclasses from renowned musicians as Angela Hewitt, and Leon Fleisher.  Born in Hong Kong, she completed her Bachelor of Music with First Class Honours at the University of British Columbia (Canada) while studying with Robert Silverman.  She is grateful for the generous support from the Concordia Foundation, British Columbia Arts Council, City University Overseas Research Award, and Vancouver Foundation.