Admission Price: Free to attend, retiring collection to the church 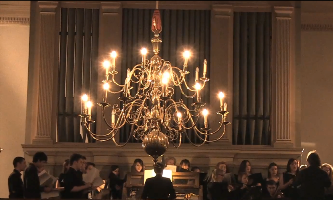 A Ceremony of Carols was inspired by Benjamin Britten's discovery of The English Galaxy of Shorter Poems and was apparently composed in part while returning to Britain from the United States. The carols were written by 15th and 16th century writers, most of whom are anonymous. The work was first sung by the Morriston Boys' Choir at the Wigmore Hall in 1943. The popularity of A Ceremony of Carols led to the SATB arrangement which will be performed at this concert.

The programme also includes:
Gardner - Tomorrow shall be my dancing day
Rutter - Christmas Lullaby
Carols with the audience