Second year journalism student, Atina, visited the Guardian Headquarters with her class mates to hear a lecture given by a senior Guardian feature writer.

“Journalism is literature in a hurry,” is a phrase credited to the British poet and critic, Matthew Arnold. Journalism is supposed to be a parade of objectivity and impartiality organized in a few minutes. You have to produce touching and accurate stories very quickly. The battle between the beautiful process of writing and doing it rapidly is very challenging. 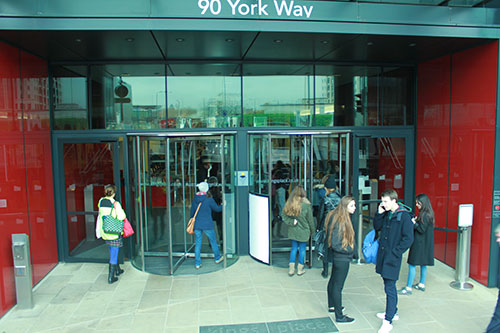 However, we find easily our motivation in London. One of the most inspiring things for us as journalism students at City University London is meeting our role models. One such meeting was with Jon Henley, a senior Guardian feature writer. On the 3rd December we visited the Guardian Headquarters for his lecture. He was working as a foreign correspondent for 20 years so his experience of how to write precisely and react quickly in every situation is vital.

During our lectures for Introduction to British media we have discussed new ways of storytelling. We have a new medium which requires more than just writing a story. Journalism now is a combination of words, photos, videos which interact flawlessly together. The influence of social media is immense and is an inevitable part of the evolution of journalism. 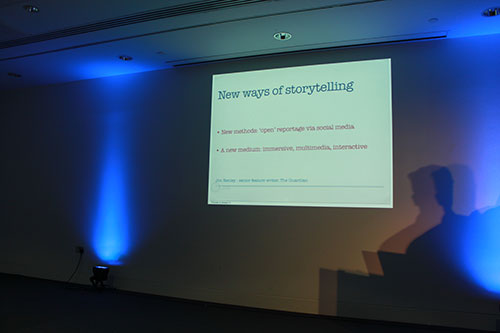 Mr Henley outlined that before an article was the final word, we were part of a one-way traffic of information. However, social media shows us that we no longer as journalists hold a monopoly of the truth. He said that now everybody is “committing an act of journalism” because social media gives us a huge platform to express opinions, to check the information we are given. This new multimillion-way traffic of news is present because the “old” audience are now all these fact-checkers, contributors and distributors of information. As he said, “it is no longer uniquely, solely us” as journalists who are supposed to provide news. Everybody is involved in this open journalism era. However, we should be very precise because the essential part is the accurate news. Nothing will supersede this characteristic.

Mr Henley has been in Scandinavia, the Baltic states, Afghanistan, west Africa and south America trying to prove this. Reporting the financial crisis in Greece and writing for Paris attacks in November are among the best achievements he has. He said that “journalism is not only responsive, it is responsible”. These cases are those which make you prove that you are reporting quickly but not at the expense of the quality of the information. Mr Henley demonstrates that the poetic aspect of writing may not be lost while we are producing stories rapidly.

Moreover, Mr Henley keeps on showing how the new medium looks like. With his project “Firestorm” he managed to create a groundbreaking news multimedia production about a catastrophic bushfire in a small Tasmanian town. This project looks like an e-book with plenty of photos, audio and video materials. The written part resembles a short story. This is a very creative way to raise the concern about a broad topic like fighting against the climate change.

The most fascinating part is that during our lectures at City we have been talking a lot about this new era of open journalism and all these innovative ways to present even only one story. We always point out why is it important to have ideas about many different approaches in every case – it is no longer only about words, photos, videos as separate definitions. They have to work together. When Mr Henley illustrated the importance of these things, we saw the direct connection between what we are focused at in the lectures and what the real world of journalism requires.

Unquestionably, we have talked many times about this business model of journalism which step by step fades away because we have access to information for free. However, we are all, including Mr Henley, optimistic that journalism itself will always be an inevitable part of our daily life although the economic model is different. 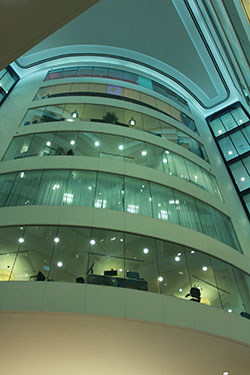 Inevitably, discussions about the Guardian are a big part of our lectures and seminars because it illustrates the legacy media. We explored plenty of things about its history and development in the open journalism era. Visiting the Guardian Headquarters directly involved us in the modern approach towards journalism. We talked to a person who created a very successful 100% digitally based project. We also understood the importance of the development of citizen journalism. Moreover, the pieces of advice about how to write accurately but memorably, putting some colour where it is relevant, were invaluable.

To recapitulate, it is always magical when the discussions during our lectures and seminars become even more lively while talking to journalists who are currently working in this open journalism era. This visit gave us more self-confidence about the approaches towards the different stories now when writing an article is no longer the final word. It is an invitation for all of us to participate in the discussion. London is full of splendid stories and inspiring journalists known worldwide who adapt perfectly to the multimedia era.