Melanie's PhD research involves investigating the theory of relational binding in memory in adults with Autism Spectrum Disorder (ASD). This theory suggests that individuals with ASD have difficulties binding together different parts of an episode to support flexible retrieval in memory.

To test this theory Melanie is using different behavioural paradigms supported by measurements of eye-movements and EEG (Electroencephalogram) to study the brain basis of potential memory differences in ASD.

In her research so far she has found that when individuals with ASD are tested with an object-location-memory task they show difficulties in explicit but intact implicit memory when tested for object-location-bindings while their memory for objects and locations per se remains intact compared to a matched group of control individuals (TD). Part of this memory difference could be related to differential attention processes. Additionally it is possible that individuals with ASD employ different strategies that potentially rely on different brain mechanisms which is suggested by differential fixation patterns compared to the TD group.

In another study she finds that when adults with ASD are tested with a structural learning paradigm they learn but at a lower accuracy level compared to a matched group of TD individuals. This study also suggests that adults with ASD seem to over-bind to a certain context. Individuals with ASD have studied a series of structural patterns. In a test phase these patterns were repaired, meaning that patterns were presented together that never had been studied together. Individuals with ASD showed better performance on the repaired compared to familiar pictures, which seems to indicate that what they learned in the second context had overwritten what they learned in the first context.

Melanie has a Masters in Psychology from theTechnische Universität Dresden, Germany (2011). 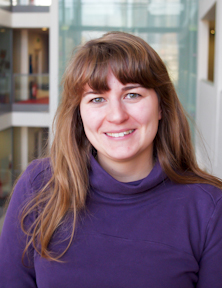